Docker is known to not to support 32-bit hosts. As per debian installation instructions: Docker CE is supported on x86_64 (or amd64), armhf, and arm64 architectures. 32-bit hosts are unlikely to become supported either – “let’s bring docker on 32-bit” issue was closed and locked back in 2014.

Nothing fundamentally prevents docker (including latest version of docker CE) from running on 32-bit platforms. I am currently running a slightly outdated version 18.03.0-ce on a 15 years old IBM xSeries 335 server with a whopping 2.8GHz Intel Xeon and 4GB of DDR RAM. It comfortably runs half a dozen containers (nginx proxies with simple API end points) and a bunch of scripts poking at various sensors. 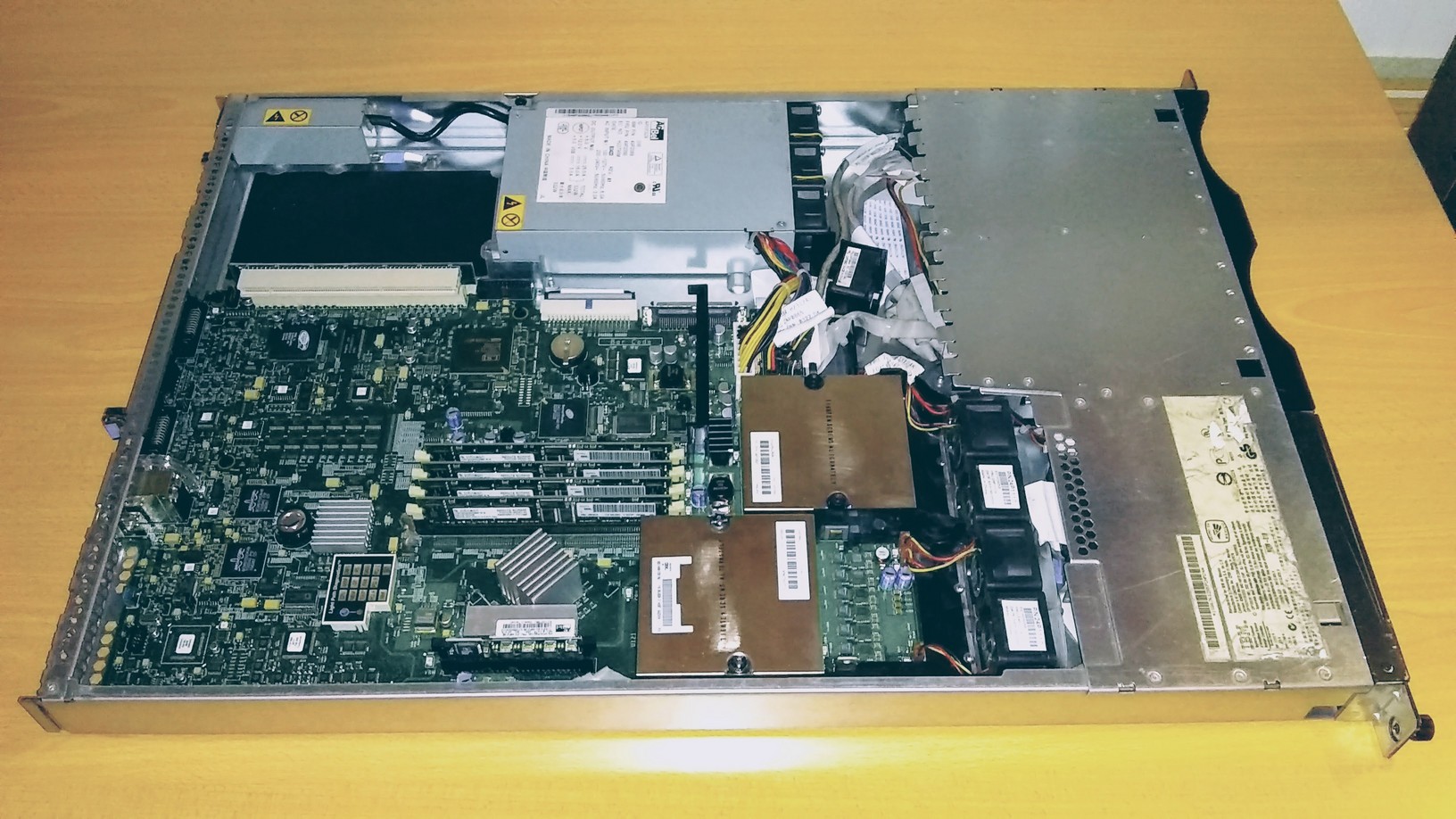 The server only supports IDE drives and I had to use a floppy diskette to sideload firmware for the network card (USB port wasn’t recognized by debian installer). This particular server been in 24/7 operation since its birth, with a brief interruption for two years in 2013-2014, when its ownership has changed (I picked it from the scrap yard, along with two complete replacement spares). Check out this boot animation from early 2000’s:

There are obviously no official docker builds for 32-bit platforms, but this fork supports building i386 docker. It is slightly outdated (18.03.0-ce as of February 2019), albeit I can’t remember any sweet features released since then anyways.

The build scripts themselves require a 64-bit environment, so if you can build docker on a 64-bit platform first, the recipe should work as-is.

I decided to complicate things further and run the installation entirely on a 32-bit system, so there are few changes to the recipe.

The above mentioned docker build scripts use an existing docker installation. So if we want to build docker for a 32-bit platform, we have to have docker installed for the build (WinRAR.rar, anyone?)

As hopeless as it sounds, there is a way out. Docker.io package from jessie-backports can run on 32-bit hosts, even though there is a big red flag in the description: Using docker.io on non-amd64 hosts is not supported at this time. Please be careful when using it on anything besides amd64. We won’t use it in production, and it works fine as a build environment.

Now is the time to install a relatively fresh version of docker from this magic repo.

Depending from the state of this repository, you might need to switch the branch, e.g. git checkout 18.03-i386, depending from what versions are currently available. I used the latest commit available as of February, 2019:

The build script assumes that a relatively fresh version of docker is available. Our docker.io is from 2015, and it doesn’t support ARG Dockerfiles parameters. That’s an easy fix:

The build script also uses an official alpine image from dockerhub, which is 64-bit. We need to replace it with i386/alpine:

Now is finally the time to run the build:

Make sure that a newly built *.deb package is present:

Thankfully, 32-bit package of docker-compose is available from this Ubuntu Xenial repository, so installation is as simple as:

Living with docker on 32-bit hosts

Bear in mind, this isn’t the end of a weird journey. Overwhelming majority of images from dockerhub are built with 64-bit binaries (see the above mentioned official alpine image), so there will be complications. E.g., the very popular nginx-proxy image is built with 64-bit builds of both docker-gen and forego, and is based on official nginx:1.11.10 image which in turn is based on official 64-bit debian:jessie image. The following changes would make it usable on 32-bit hosts:

Another example – must-have sibling of nginx-proxy, letsencrypt-nginx-proxy-companion, is based on official 64-bit alpine image and uses docker-gen as well, therefore:

…and so on. Some images of course are simply not worth porting back to the 32-bit world, and docker on 32-bit platforms is only worth using for simple images, but hey, that’s 90% of my use-cases anyways :)